It is the fourth opus of the Rage of Mages series which started in the mid-90s, conquering the minds of millions of gamers around the world, and covers over 12 years of storyline in the making.

You can choose to enter the deep storyline, puzzling out relationships between the two factions at war, races and characters, and plumbing the depths of the mysteries at work in this unique setting. Or you can focus on developing your character, maximising his abilities, crafting, getting very rare items and enchanting them via the runes system to become the best in both duels and space Astral battle ship confrontations.

Throughout the game, you will discover and fight your way in dungeons, castles and temples as a raid or as a group.

At high level, you can build your own Astral space ship and take off to explore the Astral with your party, looking for adventures, raids or if you want, become a pirate and board other ships to steal their loot. You will also discover many unique encounters such as Astral demons, ship versus ship battles, boarding other ships or even just annoying them during your journeys in the Astral.

The guild system greatly increases your opportunities and enhances your game experience in co-operative game play through specific raid encounters, some even being contested.

Whether you enjoy solo questing and discovering a world with lots of player versus environment content, or bashing other players with the player versus player mechanisms (and of course the ship versus ship in the Astral space), Allods Online is a lot of fun for all kinds of players. You can always stand aside all battles and just meet your friends in game and chitchat about whatever you like. It is all up to you.

Allods Online is free and you can play as long as you wish. All you need is a gPotato.eu account. 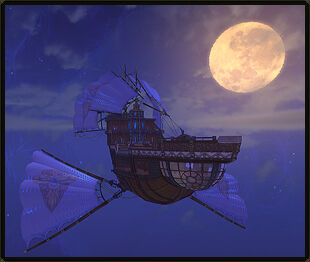 The Astral is the main magical substance in the Allods Universe. It has both creative and destructive forces in its nature. Long ago the Sarnaut planet appeared from the Astral, but after many millennia the Astral became a threat to the world it had created. The planet shattered into islands, called allods, and began to swallow those and everything that was on them, even life. But the power of the Great Mages helped to sustain some allods from being completely destroyed by the domination of the Astral.

One thing is certain for the Sarnaut inhabitants: the Astral is very dangerous and unpredictable; one can never enter it without special protection that comes from a specific mineral. Nowadays one can travel through the Astral, conduct commerce, combat, conquest and explore, while avoiding the lurking dangers that it contains, mainly in the form of Astral demons and Astral storms.

Astral travel is facilitated by Astral ships that cruise from allod to allod on a regular basis. Moreover, Astral ships can be built, controlled and crewed by players.

Players on an Astral ship can take the role of navigator finding its way through the Astral, engineer, handling the Goblins repairmen, or shooter, controlling the ships arsenal of cannons. Each crew member needs to be at the ready at all times to face enemies like Astral demons as well as other player controlled ships trying to board them up close or destroy them from a distance. The Astral is never safe and hidden pirates are a constant danger. Pirates are other faction’s player controlled ships ready to board you to steal your loot found on unknown allods in far Astral.