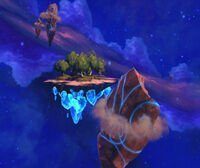 In the year 4015, life on Sarnaut radically changed due to the Great Cataclysm. It led to the destruction of the planet and the emergence of the Allods. Allods are the name given to islands which were left over after the planet shattered. The islands float in the Astral, expansive substance occupying the space surrounding the former planet. read more...

Allod instances can be reached by either navigating through the Astral, or by teleporting directly to them with a Magic Astrolabe.

There are 14 different instances, scattered within various sectors. In addition, Heroic dungeons also have an allod version in second and third layers of Astral.

These allods are populated by powerful monsters that drop valuable loot. That includes Ship Devices, equippable gear, and (very rare) mount patterns. Gear from second and third layers can be upgraded, up to legendary and mythical quality.