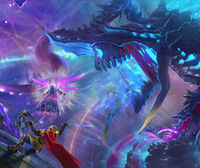 Astral demons… These are words that cause the hearts of even the most courageous and valiant warriors to seize up with mortal fear. These terrible creatures from the depths of the Astral are harbingers of death, chaos and destruction anywhere they appear. read more...

There are many kinds of demons that can be found in the Astral. While some of them can pose a significant threat to a lightly armed and armored ship, most demons can be dealt with even when using a newly built vessel.

Demons can be usually avoided if the crew doesn't feel like fighting. However, killing demons will increase the ship's reserves of Astral Emanations, which is a good reason for hunting them.

The demon's strength can be estimated by the color of the demon's map icon. Weak demons have a pink icon, they can be killed in one or two well-placed hits. Weak demons usually hunt in packs, so attracting attention of one of them will usually provoke the entire group. Stronger demons have a yellow-blue icon, and should generally be avoided. The toughest demons have a light blue icon, these huge behemoths will put up a long and difficult fight.

Demons with the purple icons have special abilities, they may be harmless or dangerous depending on situation.

All demon attacks apply a stacking debuff that reduces the ship's maximum speed. Because of this debuff even weaker demons can be very dangerous, ten stacks will significantly slow down even the fastest ship.

Certain demons will simply shoot the ship, others can only fight in melee range. Some will target the crew, or send a wave of boarders onto the ship. Several demons can temporarily disable ship devices, or damage them directly through the shields.

For a full list of demons on this wiki, see Category:Astral Demons.