Several end-game features in Allods Online require players to travel within the Astral in one way or another. In some cases such journeys can be made instantly and without any trouble, but sometimes players will have to sail into dangerous territories and find their way back.

A typical map of a hub.

Astral Hubs are relatively small isolated areas where the Astral matter is thin enough to allow travel. Surviving Allods are floating inside them, guarded by Astral Demons.

Hubs within the same sector are connected to each other by portals known as Astral Vortexes. Each Vortex is color coded, allowing players to easily find the portal that leads to their destination.

Hubs that are located close to each other are grouped into sectors, named after various elements. The giant portals that connect such remote groups are called Wormholes. Each sector contains specific types of allods and demons, and several Wormholes that lead to a few specific sectors.

On the Astral Frontier Map, Wormholes are represented by dotted lines. Allods occupied by The League are located in Pure Mercury Sector (Sector 1 of the first layer of Astral), while The Empire controls Pure Silicon Sector (Sector 2).

Several technological breakthroughs have made Astral Travel easier and faster, since ships can now teleport to remote locations. In order to teleport, the ship owner has to purchase a Magic Astrolabe, and every crew member has to activate his blessing.

A ship can teleport directly from the Astral Hangar to a random allod in any sector. It is also possible to teleport to almost any sector, and navigate to allods or other sectors from there by using the ship's scanner.

Scanners are navigation devices that can be used to detect various objects in an Astral sector, and to find the shortest route to them. They can also be used to make the ship invisible for a short time period.

Detectable objects include hubs that contain available allods, hubs that contain Large Allods (meaning allods with an Astral Hangar, such as a faction's home or the Isle of Revelation), enemy ships that carry treasures, and Wormholes that lead to other sectors.

Sometimes objects are detected by the scanner automatically, in other cases the crew will have to scan manually by using the controls located at the bottom of scanner's interface. Detected objects are displayed as runes on the scanner's monitor.

Once an object has been detected, it is possible to find the shortest route to it by using the Trace Route button. The scanner will display the colors of the Astral Vortexes that the ship can go through to reach the object. 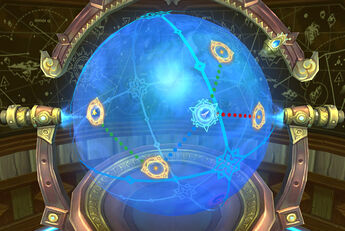 This scanner displays the same hub that was shown earlier in the article.

The ship's current hub contains three Vortexes, represented by dotted lines (in this case blue, green and red), that lead to neighboring hubs.

After scanning for small allods, one small allod was found not far from the ship's current position. Activating the Trace Route feature revealed the exact path to the allod: the ship has to pass through the blue Vortex into the neighboring hub, and then a green Vortex to reach the detected allod.

) every time they are used.

Scanning will not always detect objects. If there are no available small allods, no allods will be found. If the ship is not in the right sectors, no Large Allods will be detected. The scanner will still consume Emanations in these cases.