Contested zone for players level 37 to 38.

Allods can be held afloat by three methods, a Great Mage, a meteorite ore mine, or a Great Drake. The Dragon Ring is held afloat with life by the Great Drake of Soliskar the Wise whom keeps this small cluster of isles afloat. Soliskar sits atop a great rocky blue mountain as the inhabitants fend off attacks by astral demons and cultists. But all is not well amongst the inhabitants of Dragon Ring. A war is brewing amongst the Lizards and the Draconids. The Draconids have begun stealing Lizard eggs and magically turning the new born Lizards into baby Draconids. As a result the Lizards have no choice but to take a stand and destroy as many Draconids as possible. Outside of the native inhabitants (the Lizards and Draconids), a group of Demon Hunters have taken up residence on the allods as they have discovered an ancient and mythical Octulhu and are attempting to study it. As the cultists and astral demons continue to attack and invade, working in cahoots with Gorluxor, enemy to both League and Empire, you will journey through Dragon Ring, completing tasks for the Lizards, the Draconids, the Demon Hunters, and even the Great Drake Soliskar himself. [1]

The Lizard and Draconids hail to the Dragon Ring as their home region. These two have lived in peace for many years but have recently begun warring against each other after the Draconids begun stealing the eggs of the Lizards. [2]

In order to get to Dragon Ring, you must travel to Coba Plateau and take the ship located near the Isle of Weakness.

Isles:
Dusky Isle
A dark forest filled with tapirs and little astral demons at the coast.
Pangol Isle
A more lush forest that is home to astral demons, alligators, Draconids and even the occasional hydra living along the coast.
Darkscale Isle
A lush jungle with ruins that witness Draconids and Lizard Warriors battling with each other. Astral demons inhabit the Cursed Lands which are found along the coast of this isle.
Drakefang Isle
A large rocky blue mountain that at the top houses Soliskar the Wise, the Great Drake responsible for keeping Dragon Ring afloat. 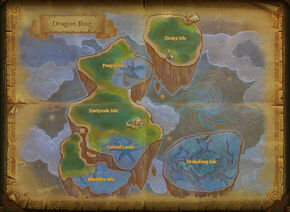 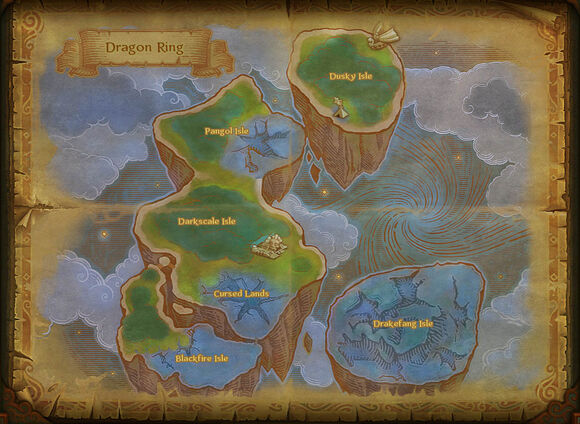