Nezebgrad is the capital for the Empire and is populated mostly by the Xadaganians along with the Arisen and the Orcs. These races have a notable history of living, working, and fighting together for the pride and purpose of the Empire. Being one of the largest zones in the game, players of all levels can be found wandering about questing, talking, or doing business with merchants. [1]

Although sport has a way of uniting the people through hard times- Goblinball - has been reknowed to attract crowds of people to the stadiums. Nezebgrad is a large commercial city under the tight control of the government and the police force. However, due to the war in the Holy Lands the guard is spread thin. There is a rise of criminal activity throughout the city and the player is asked by several NPCs to help them clean up their great city. Each day many Nezebgradians do a pilgrimage and visit the monuments to Nezeb that are spread throughout the city and lay flowers down as a sign of respect. [2]

Nezebgrad is seen to be a highly industrial city with many quarters.

Deep below the city of Nezebgrad lies the massive sewers of the great city. Slugs, rats, and prisoners of war can be found here. The Sewers are the starting area for players after finishing the tutorial.

The Boiler Camp is home to several industrial warehouses and the first dungeon an Empire character will encounter - the XAES, which stands for "Xadaganian Astral Energy Station".

Sewage Plant The Sewage Plant is the home of slugs, hyenas, and smugglers. The plant is full of clutter, boxes, and trash. It isn't exactly the cleanest part of the city.

The Imperial Square is home of the Sarnaut-famous Yasker's Tower. Home to the auctioneers and the bankers, the tower remains a popular place of travel for characters of the Empire. Within the tower trainers for each archetype and profession can be found. Surrounding the tower are several merchant stands that have vendors for a wide verity of items including clothing, jewelry, and weapons.

Victory Park is a massive park home to wild hyenas and fire elementals. Inside the park a massive monument can be found to Nezeb.

Izune is home to most of the Orcs is Nezebgrad. It is a particularly crime-ridden part of Nezebgrad, and respectable citizens keep their guard up when venturing there. Hadron Quarter 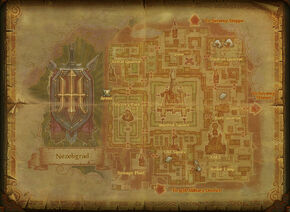 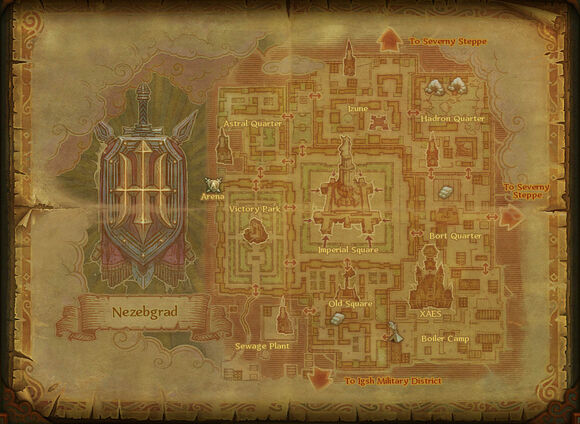