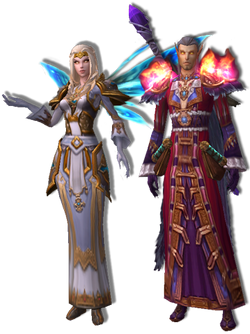 Elves are probably the most remarkable creatures of Sarnaut, evoking very contradictory opinions and attitudes towards them by other races. Wise sorcerers and eccentric venturers, extraordinary scientists and capricious wastrels… Their great power can only be compared to their great levity. However, they are not to be underestimated – as Elves are devoted to the League and show no mercy to their enemies!

Historians in the future, chronicling this period, may write about their contribution as “the time when beauty saved the world”.

The Elves are the most ancient of all the races on Sarnaut. Throughout their history, the Elves have gone through many stages of development. They were the only wise inhabitants on the planet once and have watched the development of the other races. They were also the first to form a state, and first to understand and master magic.

Originally, the Elves were divided into several species, and they used this basis to create Families – large communities of Elves united by blood ties. The principles and structures of the Elven government were set down a long time before the Great Cataclysm occurred. These principles and structures were debated and agreed by representatives of the most influential families during a recurring event called the Elven Ball.

The Elven Ball was an important meeting for the Elves. It was during these gatherings that the most important decisions which affected the whole kingdom were decided. Discussions about the use of magic and political matters which are important in all capitals were often the main topic of debate.

A decision was made during the Elven Ball that would have huge impact on the Elven race. This was the creation of the Great Ball of Families, which replaced it. In the aftermath of the Great Cataclysm, Elves had lost large numbers of their kin, like the other races. The Great Ball could no longer be called “Great”, and within a couple of centuries it acquired a new name: The Ball of Eight Families.

These eight families were the fastest to adapt to the new world they found themselves in. Through a process that contained intrigue, mergers, alliances and force of arms, The Ball of Eight Families came into power over the rest of the population. With the power concentrated, the more powerful a family, the more suffrage it had.

All the important questions for the nation, including both internal and external issues were discussed in the evenings of the official Balls, held by the Eight Families... and there were many, many questions.

In the year 707 of the New Era, an allied force of Orcs and Xadaganians captured the Elven allod of Grokh. The Great Mage Clod de Vevr, the frustrated mage who trained Rodogor in the art of magical sciences was killed. De Vevr’s family was one of the Ball of Eight Families, and they called an urgent meeting. The unprovoked attack prompted the Elves to seek allies, the result of this was signing an accord with Kania to join the League.

- The Empire seems to have some problems with magazines with pictures of elves.

Retrieved from "https://allods.fandom.com/wiki/The_Elves?oldid=20249"
Community content is available under CC-BY-SA unless otherwise noted.