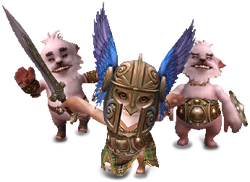 The Gibberlings always travel in threes. It is safer and more fun this way – for if one falls, their brother or sister are always there to help! Brave and resilient adventurers, they poke their noses into every corner of Sarnaut, never missing an opportunity to battle the Empire along the way! It’s no surprise that their resourcefulness led to so many important discoveries, such as Astral travel.

They are creatures from a destroyed part of Sarnaut. Due to their curiosity, peacefulness and friendliness, they quickly adjusted to the new conditions. They are trusted, reliable friends for their allies and a dangerous foe for those that don’t take them seriously. However, unlike other races, they have no ambitions for this world. Their greatest desire is to return to the times of Isa, when the whole world was open to them for exploration. Will the Gibberlings find a way to be as happy as they were before, or will they think of something new? With everything developing so fast, there is little doubt that they will get an answer, and unlock brand new questions soon.

Gibberlings' appearance is somewhat like a cat/panda hybrid, with colors and patterns ranging from gnome to monkey, to panda, to fully snow-white. Female gibberlings, however, usually have red-brown/pink-beige colors. Always born as triplets due to their (cat?) nature, they're known to lose sense of danger when left alone. One gibberling of Knife Clan in Tutorial is a good example of this.

The Gibberlings are small, funny, furry and rational creatures that once inhabited a separate continent on Sarnaut. Called “Isa”, which means island in their language, it was significantly smaller than Yul. Their natural enemies were tribes of wild Orcs and the severe northern environment.

The entire history of the Gibberlings is a story of their struggle for survival.

The sea offered them two benefits, giving them a primary source of food and forming a substantial amount of protection from their enemies. A seafaring race, Gibberlings are excellent fishermen and sailors. As time went on, many Gibberlings chose to live on ships as their home, allowing them to easily escape from threats and avoid fights in their swift, agile craft.

This does not imply that they are not able to look after themselves in a fight, as they will gladly pillage any Orc settlements that they come across if the opportunity arises.

The Gibberlings are exceptionally fertile. Giving birth to twins can be a cause of disappointment to expectant parents. Triples are the typical brood, and there is even a name for three siblings: a sprout. They rarely live apart as they miss each other if apart for short periods of time. It is often the case that if one dies; their siblings will also pass away soon afterwards.

The Gibberlings have noticeable traits including their extreme curiosity, restlessness and an inclination for fortune telling. They are kind and very clever, and their agile and coordinated actions fully compensate for their short stature. Sprouts almost always travel together, especially when moving through dangerous areas. They also fight as a squad of three.

Seeing a lone Gibberling is a very rare event indeed.

Other nations and races treat the Gibberlings with respect. With records among their friends and foes chronicling their numerous heroic deeds, they have proved to the rest of the races of Sarnaut that size doesn’t matter. After all, it was also a Gibberling who discovered the way to travel through the Astral, kicking off the Era of Astral Travel.

This secret formed a huge part of the reason they joined the League, as their main ambition is to find a new motherland to replace their lost home of Isa.