The Legacy of the Junes: Astral Demons 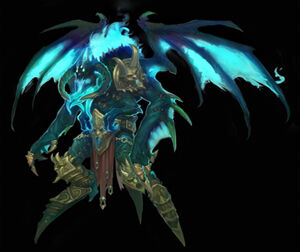 Astral demons… These are words that cause the hearts of even the most courageous and valiant warriors to seize up with mortal fear. These terrible creatures from the depths of the Astral are harbingers of death, chaos and destruction anywhere they appear.

The reason for the appearance of these monsters is a great mystery, lost to history. The wisest inhabitants of Sarnaut have tried for many years to solve the riddle of their appearance without success. But one thing is obvious: their main targets are the Great Mages that protect the allods from the destructive power of the Astral.

As most people who encounter these demonic creatures tend not to survive, information about them is rare and often second or third hand. We can say with certainty that they dwell in the far reaches of the Astral which apparently nourishes them with a life force. Astral demons cannot remain outside the Astral for too long, as when they are outside of their protective cocoon, they start to lose power and become more sensitive to attack.

Most of the time, these creatures are not very smart, but this does not take away from their massively destructive nature. Their combat tactics are very straightforward, and they will usually attempt to overwhelm their enemies with numbers rather than being particularly tactical. Astral Demons first appeared on a large scale during the battle for the Kirah allod, shortly after the League army landed on it to mine the precious mineral that would allow them to explore the Astral. The appearance of the demons instilled terror and fear into the middle of the battle that was raging between the League and the Empire.

With both factions embroiled in a pitched battle, neither expected the monstrous assault by a new enemy intent on destroying them both, and they lost massive numbers of troops in the retreat that followed. The Great Mages were trying to protect their respective allods with their special squads of Guardians, but still many of them perished under the relentless assault. Without their magic to sustain them, allods began to disintegrate as the destructive forces torn them apart, just as they had done 900 years beforehand.

The allods lost a huge amount of their mass and the remaining Great Mages had to use every ounce of strength and all the resources available to maintain what was left of their homelands. A new landscape emerged from the destruction that followed, and maps had to be redrawn as a new geography was created by the remainder of the old realms. The situation on Kirah allod was particularly bad, with a massive force of demons overwhelming the two great armies that were fighting there. It was almost as if they picked their timing perfectly to inflict the maximum damage to both rival factions in one fell swoop.

In the year 930, the Astral Demons attempted another invasion. While it was much less powerful than the previous assault, it seemed like the demons were testing the strengths of the defenses that allods inhabitants had put in place. After the trauma of the first attack, both the League and the Empire had been prepared for an inevitable second attack and the Astral Demon’s invasion failed. This time they did not retreat into the depths of the Astral, remaining to wander on the Astral shores and attacking those ships foolish enough to come within reach. Both the League and the Empire created special defense forces and trained them to protect their native lands, always at the ready to defend their homeland from another assault.

As the next thirty years passed, the number of Astral demons continued to grow. In response to their presence, a form of Cultism emerged, with sections of the population including the Orcs and the Arisen greeting the demons. They were seen in a variety of lights, with some considering them a fair punishment for the allods inhabitants, while others saw them as the saviors of Sarnaut or even messengers of Evil. They believed that only by serving the Astral Demons would they be able to save people from the inevitable death that would happen during the next assault.

With a powerful enemy at their gates, politicians within both the League and Empire realized that only through a united front would they be able to overcome the next invasion. The Great Mage Skrakan was among them. Having faced the first demon in the year 576 of the New Era, he knew that the reasons for their appearance were buried in the history of Sarnaut. These ideas were proved correct when a book written by the Great Mage Tka-Rik, the last member of the lost Junes civilization was discovered. 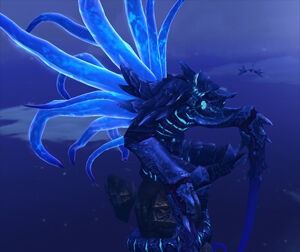 For thousands of years, Tka-Rik was the Great Mage of a lost and unassuming allod called Gipat. Living a hermit’s life, he shied away from communications with the inhabitants of his allod, as well as the other Great Mages. Facing the demons alone, he failed and was mortally wounded. Before he died, he was able to contact Skrakan and informed him about the book he had been writing in his solitude called “Revelations about the nature of the Sarnaut World”. It would be known to the general public as “The Tka-Rik Revelation”.

Tka-Rik told Skrakan where he could find the book in the dungeons of the Junes civilization on the Gipat allod. He had used his time to sustain and protect the dungeons during his life and did not want them to be ruined after his death. As he died, the allod was torn apart as the Northern and Western sections were swallowed by the Astral. With most of the allod destroyed, a small Astral isle remained protected by the Will of Tka-Rik, and Skrakan sent his troops in search of it.

In the year 965, a League patrol ship reported a tiny and unknown allod. The ship’s captain landed and found the dungeons. Within a few weeks, the revelations were delivered to Skrakan. He was astonished by what he found inside.

"I am the last of the Junes and it is time to repent for my sins. Two thousand years before the Great Cataclysm that broke our world into pieces, the Great Mages of our civilization opened a door into another world. They were seeking power and authority, and found a world filled with primordial incipient energy that would fuel all our magical energy requirements. This is exactly what we did, and it was from this place that the demons, our Curse, appeared from. The primordial energy is an essential environment for the elemental spirits of pure Evil and Destruction.

We were taken by surprise when the demons attacked us and came through the portal into our world. Several Junes Great Mages and I managed to close the gates and stop the invasion, but those who had already broken through the barrier devastated my entire nation, killing men, women and children wherever they went.

For several hundred years, my friends and I chased the demons, but at the same time they were also hunting us. We were eventually victorious, but had paid a high price for our victory. The Junes civilization was nearly exterminated, and we never revealed the mystery behind the sudden demise of our civilization to those who followed into our lands.

When the Great Cataclysm occurred, the protective spells became weak and the doors to the new world reopened. I understood what it was as soon as I saw the Astral swallowing our world. Astral is that primordial energy that fuels their world and the demons themselves.

I hid on the Gipat allod and broke all my connections with the outside world. I was scared to accept the blame for my entire nation in bringing this destruction to the world. My cowardice was the reason for my silence about the threat that the demons posed. It was the event on Umoira in 576 when the demons revealed their presence for the first time, and they have come back again and again ever since. Three hundred years ago, I fought another demon alongside Zak, the last remaining Junes. Now he is dead, and I am alone as the last surviving member of the Junes civilization.

I cannot keep this secret in silence any more, and must unravel the mystery that caused my race to commit a massive crime, a mistake that can lead to the destruction of the entire page. The demons are here to stay, and they will attack sooner or later."

The last page of “Revelations” was obviously written in haste in the last few moments before Tka-Rik died.

"Skrakan, I believe that you will find this book some day. The demons invaded our world and the only chance you have is to seal the door to their world once again. I’m sorry that the Junes left such a devastating legacy for those that followed us on Sarnaut. Forgive me…"

Skrakan made the “Tka-Rik Revelations” public, and with this understanding the war between the League and the Empire faded away. The word “Junes” became a swearword and both sides realized that the time for a united front had come. Putting aside their differences, they joined forces and prepared for a campaign against the invaders from another world.

The year 966 will be remembered for a famous event – the meeting between Skrakan and Nezeb, who signed the peace accord between the League and the Empire. The united forces of the two kingdoms sent scout ships into the far Astral in search of the Junes Gates using hints from the book. Within a relatively short time, the location of the gates was discovered and two massive fleets, embarked to seal them forever.

Both powers put their full weight behind the campaign and amassed an army the likes of which had never been seen before. Many Great Mages, both old and experienced, or fresh out of study stood on the bridges of the Astral ships. Skrakan and Nezeb led their fleets into battle, leaving Aidenus and Yasker behind to protect their capitals.

As they approached the gates, they faced increasingly fierce opposition from the demons in their way. Both sides incurred losses, but the fleet of the United Army was unstoppable. After a pitched battle, they finally captured the tiny allod that contained the Junes Gates. Both the League and Imperial armies held the demons at bay while Skrakan and Nezeb repeatedly attempted to seal the gates. They eventually succeeded using instructions from “Revelations”, but their victory was on a razors edge.

The inhabitants of both Kvatoh and Igsh prepared to greet their heroes after receiving news of their victory. But as they saw a fleet returning, all they could see was black mourning sails on the horizon. Ships packed with survivors and the dying and wounded approached. Only those that were far away from the Junes Gates were lucky to survive the terrible Astral storm that struck as Skrakan and Nezeb sealed the Junes Gates.

All those that stood on the allod when the gates were sealed perished. With the loss of many lives, including their own, Skrakan and Nezeb saved all the allods. After that epic battle, the threat of invasion by the Astral demons began to dissipate. While demons did survive in the Astral space, they are not as powerful or numerous as they once were. However, they are still incredibly dangerous to any who come close.