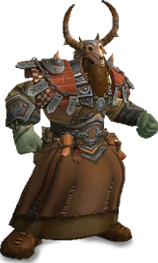 The Orcs are a walking natural disaster, capable of destroying anything that gets in their way. If they could organise and unite under a strong leader who could be as respected as the Ancient Heroes, the Orcs could rule over the world.

The Orc race has a long history on Sarnaut, which has mainly been concentrated in the Eastern part of the continent of Yul. These mighty creatures possess great strength and endurance, but are poor at crafting and magic. Unsurprisingly, their main activity is either preparing for war, or fighting in wars.

Although the Orcs will unite into hordes before going on raids against their enemies, they are primarily a nomadic people. When they do settle, they build communities that are planned to be temporary and easy to abandon. These communities are usually located in the steppes, where their hardy stature allows them to survive.

An average Orc is a full head taller than a human. Used to open areas, they are uncomfortable living in areas such as forests and their hard skin can easily stand the heat of a relentless sun. There are also many Shaman among the Orcs, allowing other Orcs to increase their physical strength by conducting mystical rituals.
Orcs are the most anarchic and freedom-loving creatures on Sarnaut. Each Orc is his own boss, and is only interested in looking after himself. This is partly the reason why they are so scattered, divided into families and clan units, often fighting amongst themselves.

In ancient times, the Orcs did not have a state or kingdom of their own, Orc tribes lived throughout the Eastern lands. After the Great Cataclysm, their situation became precarious as they did not have a Great Mage to hold their land together, and many Orcs died trying in vain to save it. The allods controlled by the Great Mages did not suffer the same fate as the Orcs lands, but people from other allods were not welcome in Orc territory.
The once Great nation became weak and vulnerable, and to ensure their survival and to hold onto what was left of their lands, the Orcs joined the Empire, forming an alliance with the Xadaganians and coming under the protection of their Great Mages.